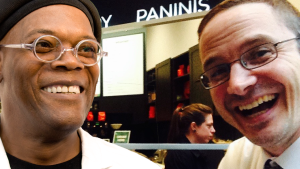 By Rabbi Katz
Dec. 5th, 2015
Samuel Jackson, the action thriller movie star, was quoted several years ago in the LA Times (Dec., 2012) for saying, “I don’t think it’s about more gun control. I grew up in the South with guns everywhere and we never shot anyone. This [shooting] is about people who aren’t taught the value of life.” Of course, one does not need to dig too deep into Google Search screens to find movies with Jackson and others starring as a trigger happy and ruthless murderer. Oh, and of course this public service announcement from Mr. Jackson forces the real-life-murderer to take responsibility for his actions and stop blaming society. But lets not look away from the elephant in the room. Many movies have undoubtedly impacted today’s world by making murder, blood, and gore something that the average Joe is totally desensitized to.

Gun control battles will surely rage in the political arena after the first mass shootings by the Daesh Islamic terror cells. War is war but lets not forget that not all of this year’s shootings in the U.S. are related to enemies of the U.S.  In the end, I think we can all agree that there is at least some truth with Mr. Jackson’s assessment. The values of our country play a large role in how we behave which indirectly places some of the blood on Hollywoods’ (far from Holy) hands for some but not all of the domestic gun crimes in the U.S. I’m not even going near the question of gun control and policies in this article. Nonetheless, while many will cry against the symptom by trying to correct a broken policy, perhaps as a country the first step is to dig a little deeper and ask ourselves if we’ve strayed too far from our grandparents taste in movies.

Thus far in 2015 the top five blockbusters are Jurassic World ($650 million), Avengers: Age of Ultron ($450 million), Inside Out ($350 million), Furious 7 ($350 million), Minions ($300 million). Is it a surprise that three out of five involve tremendous violence and gore? Of course, our values alone won’t stop Daesh from being Daesh. However, it is important that we recognize that these movies are a reflection of the country’s internal world and that the desire for such entertainment is a reflection of the country’s values. After all, someone did pay the cumulative billions of dollars to watch these blockbusters.

Allow me to share two personal examples of how desensitized we’ve become. Does anyone remember Pulp Fiction? Ask your average Joe on the street today and they’ll surely reply “Great movie.” The famous scene in which Samuel Jackson quotes the Bible in Ezekiel 25:17 before assassinating someone in cold blood was far from the words of Ezekiel the Prophet. Quentin Tarantino and Roger Avory did a bible smash-up making G-d seem like some angry mobster with a chip on his shoulder. This was a gross misrepresentation of Ezekiel the Prophet’s words, work and Torah in general. In fact, most of the quote is made up. In the above parody video showing one of these famous quote scenes, you’ll notice the murder and guns have been removed. This is because when I showed my friend (who doesn’t even know what a movie theater is – slight exaggeration:), he was shocked and made me take out the end of the clip when Samuel Jackson and John Travolta ruthlessly and in cold blood turn the victim into swiss cheese with a flood of bullets. “No guns!” my friend cried out. “Children might see this!” he reminded me.

The other lesson of how desensitized we’ve become was from one of my children. He and his cousin were around six years old and were watching a Disney cartoon in which one character was trying to kill  another one. Long story short, that night my son had nightmares and was in tears. He couldn’t get the image out of his head. It was a loss of innocence, from a cartoon! Our computers source news and information and our children are plenty of entertainment so we don’t have a television in the house which might contribute to his sensitivity. In my humble opinion that sensitivity, especially during the early developmental years, is a good thing. Mr. Rogers died years ago leaving parents with the sole responsibility to give their children loving attention in a safe place called home.

What would it be like if everyone could be rehabilitated to have nightmares like my 5 year old son upon watching a movie that was rated PG-13? We’d love to hear your thoughts in the comments.